One of the most common patient complaints is, “Doc why do I see floaters?” 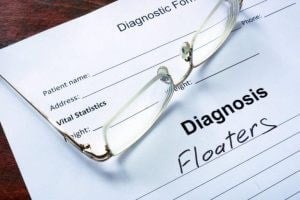 What is a floater?

Floaters are tiny pieces of a protein called collagen. They are in the gel that fills the cavity of the eye – the Vitreous Gel.

We become aware of floaters when they are large enough to cast a shadow on to the retina and they appear as black dots, squiggly lines like cobwebs, or circular or oval shapes. These benign floaters are often seen while working on the computer or gazing at a blank surface. They appear as little dots that move back and forth as one looks around.

Anyone can have floaters at any age. They may be associated with eye trauma, infection, inflammation or commonly, just with advanced age. They can be seen in diabetics who may have bleeding inside the eye from abnormal blood vessels. They are sometimes seen in very nearsighted persons as well.

What is a Posterior Vitreous Detachment?

A common situation involving floaters may occur in older people, and it is called a Posterior Vitreous Detachment. The vitreous gel deteriorates and contracts as we age. As it contracts, it may pull on the retina (the light-sensitive, inner layer of the eye). As the vitreous gel tugs on the retina, light flashes are often produced and floaters become more visible to us. This type of floater and or light flashes are of much greater concern than floaters we may have been aware of for years.

Vitreous detachment may lead to retinal detachment, and if the retina detaches there is a risk of permanent vision loss. For this reason, we should never assume that our floaters are benign.

We recommend that anyone seeing floaters for the first time should have a comprehensive dilated exam as soon as possible. If there is sudden blurred vision, cloudy vision, shadows or a curtain-like obstruction of vision, it is extremely important to call your eye doctor immediately.

Old Chinese Proverb: There is no such thing as a small hurt in the eye…

* All information subject to change. Images may contain models. Individual results are not guaranteed and may vary.