C. Diane Ramirez-Shank, OD: My profession is optometry, so I've done eyeballs for over 30 years, and I have a practice in South San Antonio. ], so I do a lot of Spanish exams, English exams, and been there for a number of years and really love the profession.

C. Diane Ramirez-Shank, OD: Becoming an eye doctor was probably because of my vision. And since about eight years of age, second grade, I started out with eyeglasses. Myopia stigmatism, and pretty common, but accelerated pretty quickly. So by the time I was in middle school, I had some pretty thick glasses. But my vision was great. I was correctable to 20/20, so got into dance and then started doing contacts. So it's something you live with and it's no big deal when you wear glasses and/or contacts, if you're correctable. So that was pretty much what led me to the field. I was pre-med, had an uncle who was an optometrist and decided to do optometry and really glad I did.

C. Diane Ramirez-Shank, OD: I'm passionate about my profession just because I think the impact that makes on their life. And I think to myself, if I had to lose a sense, my eyes would be the last. And so it's a very fulfilling profession and I never get tired of seeing a six, seven year old put on glasses for the first time and see the look on their face when they say, "I see grass," or, "I can see that tree out there," and it's just a really gratifying feeling. So I love the profession, yeah.

C. Diane Ramirez-Shank, OD: So I'm wearing these glasses and probably not what I would have picked for my optical, but there are special glasses. They're UV protection, I have UV protection lenses. Wear these inside, I have some dark ones that do the same thing outside because of the special lens implant that I received two days ago. So a type of cataract surgery, a new technology, and you do have to protect your eyes from UV light, so that's the purpose of these glasses.

C. Diane Ramirez-Shank, OD: Focal Point, I refer a number of my patients. I trust and good friends with a couple of the physicians that work here. And so, wearing contacts, it's a subtle change on a cataract and I am in my sixth decade, beginning of the sixth decade of life, so it's what I counsel patients, this is normal, it's a normal aging change. And if you're able to drive comfortably, I can refract them, get them to a point where they could pass a DPS requirements. Normally that's a good alternative with glasses. Nobody wants to jump into surgery. That's not your first suggestion. So mine was a subtle change. And so I finally came over here and said, "Check my eyes. Let me have a real exam instead of doing it myself," and found out I had a cataract, so started looking at all the different options.

C. Diane Ramirez-Shank, OD: When they told me I had a cataract, the first thing you think is, wow, I am O-L-D. That's what I tell patients. You know what? Cataracts, no big deal. It's an aging change. It's not in the disease category. It's just an aging change. We get wrinkles, we get cataracts and it's a normal thing and totally fixable. So because of that, versus a glaucoma diagnosis or retinitis, or some other diagnosis that's not fixable, it wasn't that scary. But anybody to having surgery on their eyes, it's a little anxious feeling.

C. Diane Ramirez-Shank, OD: As an eye doctor who refers patients to Focal Point, I was aware that there were different technologies available, different lens implants, more based, I believed, on the patient's prescription, the axial length of their eye, and there were different parameters that were put into the case. And then the doctors here at Focal Point would decide what might be the best option. So I wasn't aware of, I didn't have much information on this new lens that I had implanted two days ago, and did a little homework on it, and just pretty amazed at the options with this lens.

C. Diane Ramirez-Shank, OD: The light adjustable lens, and it was explained to me, and then I did a little homework on it, it's an amazing new technology that after you have the cataract surgery, and now it's very accurate on predicting if you want to be 20/20 at distance, they can get you pretty close there with most of these different options. This particular lens for someone that has a higher prescription or a stigmatism that at the higher prescription, you can tweak this instead of with postoperative glasses or postoperative contacts, you can put that prescription that I normally will prescribe postoperative glasses. Sometimes it's just a little bit, and they just have to work for reading or a little bit for night driving. But typically there may be a little bit left there after cataract surgery, that's normal.

C. Diane Ramirez-Shank, OD: And with this particular lens, two to three weeks post surgery, they go in there and the instrument that they use moves the polymers of the lens and arranges it to... I had a high astigmatism, so the polymer of the lens will align with where my astigmatism was and get rid of it. And if I decide, "Okay, I want to have this eye for reading and that eye for distance," monovision, a lot of patients are familiar with that. I was using my contacts in that manner. I can say, "Okay, I want this eye for reading, I want that eye for distance," and they basically adjust the polymer of the lens. And boom, you're good without any postoperative correction in glasses or contacts. Pretty amazing.

C. Diane Ramirez-Shank, OD: More amazing than the actual lens itself, and what it does, and what it can do, is that I had the procedure 48 hours ago, two days, a little over two days ago. And my first day, 24 hour post-op, I was 20/20 minus. Oh, it was probably about 22,000 before. And I was amazed and apparently it's going to get better and better because I have some uncorrected astigmatism that can be tweaked at the end when they lock in this power. But I was reading the 20/20 line. And I actually kind of thought, oh, do I have my glasses on? And just you're used to 50 years plus of adjusting your glasses. Truly amazed, just miraculous for someone who's been that dependent on some type of device to be able to read an eye chart.

C. Diane Ramirez-Shank, OD: So this light adjustable lens is one of the most advanced, and just amazing technologies to me. In fact, it will change the way I practice. And now having gone through this, sometimes patients that are apprehensive. Tell them, "This is a piece of cake." The day afterwards, really besides the glasses, no one could tell that I'd had a cataract surgery, and just an amazing vision and only getting better. So very, very wonderful technology.

C. Diane Ramirez-Shank, OD: SOP, standard operating procedure, with this lens. And this was supposedly a down, you had to be a compliant patient and this might be a negative. Maybe not as fashionable as I would pick, but these glasses, you wear these clear glasses inside. I've got some dark glasses and these actually look a little cooler I think. These are the dark glasses. So these block out a hundred percent of UV light. So you have to have that, you have to block out any UV impact on the lens because that UV is what is actually going to change the polymer of the lens to do your final correction. So these are worn outside. These clear ones are worn when I'm inside and you'll do that. I have my next procedure in five days, they do them a week apart. And so about two weeks post the second eye, they'll go in there with the actual light-adjusting machines mounted on a slit lamp, dial in what your final power is and you are done. And I probably will keep these. These aren't so bad. So that's the procedure. 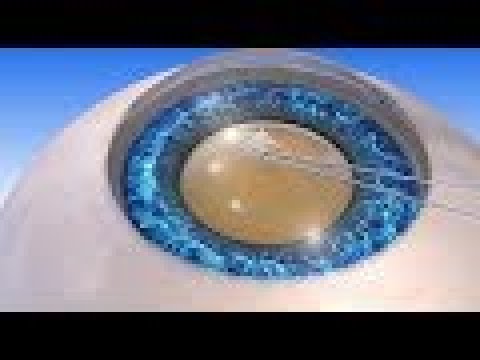 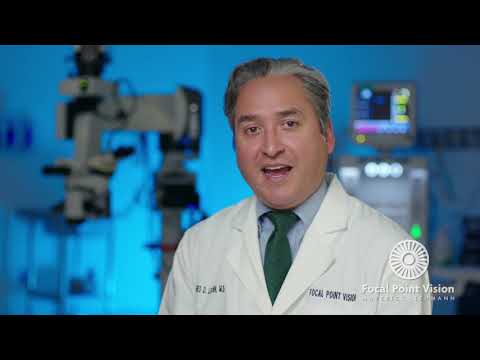 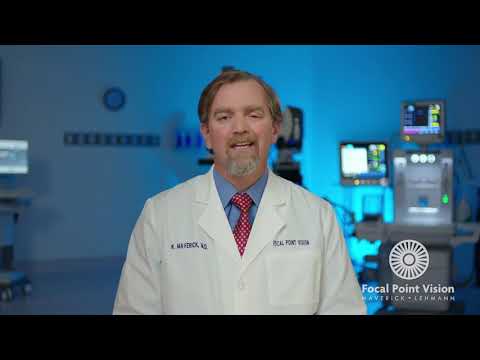